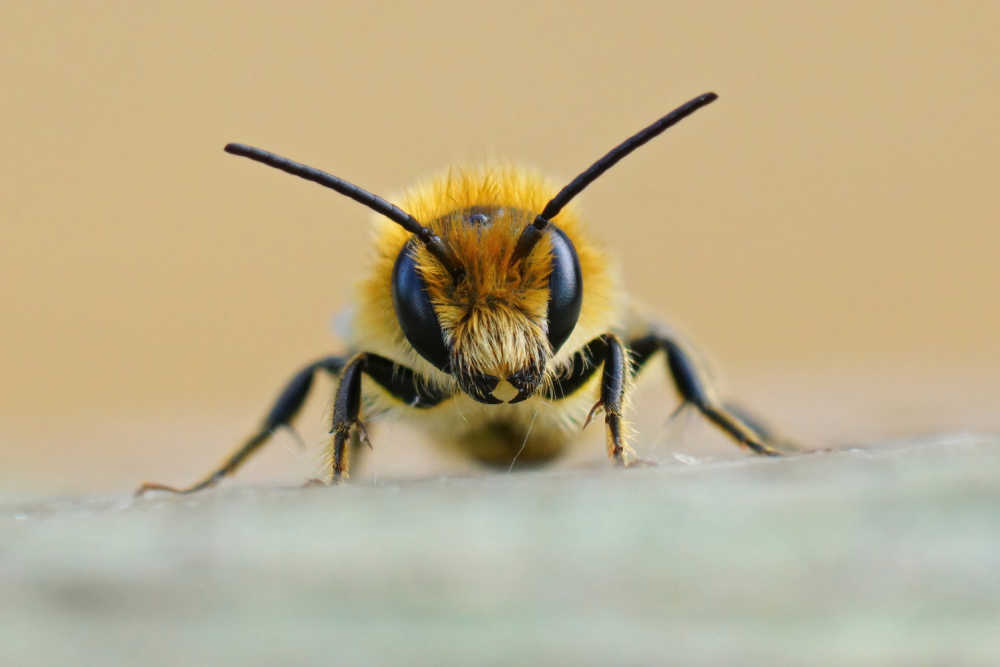 The honey bee is a fascinating insect, equipped with a range of tools to help it perform different functions. In this article, we’ll take a deep dive into the anatomy of a honeybee. This page is packed with super-helpful knowledge for a beekeeper, or anyone interested in bees.

What are the main parts of a honey bee?

A honey bee is made up of an abdomen, thorax, and head that has two antennae. It also has two pairs of wings and three pairs of legs for movement. Like most insects, bees have a hard outer shell or exoskeleton. Let’s take a closer look at the parts of a honey bee.

The honey bee’s head is the engine room, providing it with a wealth of information. In addition to collecting nectar, the head also receives and processes the gustatory, olfactory, and visual inputs.

The honey bee has two sets of eyes. Compound eyes are the large ones that are hard to miss. They have multiple units which can take individual images and send them to the brain for processing into one large image.

Bees also have three simple eyes that are made up of a single lens that collects UV light. These eyes assist with locating pollen.

When compound and simple eyes are used together, they provide the honey bee with exceptional vision that makes sourcing food sources easier.

The jaws (mandibles) of a bee protect its other mouthparts. They are extremely strong and are useful for biting and cutting. While worker bees rely on their mandibles for chomping wax, the queen and drones possess a pointed mandible that helps bite and cut.

Like humans, the bee has a soft tongue, known as a proboscis, that can be extended. At 0.25” (6.5mm) in length, it may not sound long, but proportionately, it is extensive. This allows the bee to effectively collect nectar and groom.

Protruding from the top of a bee’s head is the antennae. They provide a huge range of sensory information for the honey bee. Odor reception, vibration, CO2 detection, and much more get processed using each antenna. We recommend checking out our in-depth guide to bee antennae if you’d like to learn more.

The honey bee’s inner head houses its brain, which is incredibly powerful for its size. It can process multiple sets of data and stimuli at the same time, allowing it to make quick decisions.

Inside the head, glands allow a secretion to get produced and released from the mouth. This is useful for making royal jelly and wax.

The bee’s thorax is part of the midsection and assists with movement. It has muscles that control two pairs of wings and six legs. Crawling and flying wouldn’t be possible without the thorax.

Two sets of wings allow the honey bee to fly through the air at 15 miles per hour. Drones have much longer wings and well-developed flight muscles to help chase down the queen during mating. They can fly up to 22 miles per hour.

A bee’s hind wings are much smaller than its fore wings, but they’re both necessary to fly. To help with lift-off, they slightly twist their wings into a propellor shape for greater aerodynamics. Their fast pulsating muscles create impressive wing-flapping speeds. Learn more about how a bee can fly here.

Honey bees are flexible and agile thanks to six pairs of legs. This comes in handy when the insect crawls into awkward places like inside a flower stamen or honeycomb cell.

In addition to movement, the worker bee’s back legs have pollen baskets for storage during foraging missions. They’re able to collect, pack, and carry propolis and pollen back to the hive.

A honey bee’s front legs are purpose-built for antennae cleaning, with a handy comb-like tool to run each antenna through.

Other useful tools found on a bee’s legs are sticky pads and claws to help land on uneven or slippery surfaces. The ends of their legs also house taste receptors.

Have you ever wondered do bees have knees? Check out our article to get fast answers.

A honey bee uses a stinger for defense against other insects and mammals. They will often die after using their sting, so it gets used as a last resort. The bee often survives stinging another insect but will usually die after using it on larger animals and humans.

The abdomen houses the honey bee’s reproductive organs. The drone has an appendage that hides out of sight until mating. These sexual organs are torn from the abdomen after their first use, killing the bee instantly.

Female bees have ovaries that begin producing eggs from 1-2 weeks. The queen also has a spermatheca for collecting sperm during mating flights. This supply of sperm will allow the queen to fertilize her eggs throughout her life.

Worker bees possess glands under the abdomen that secrete four pairs of scales. It is released as a liquid that quickly hardens into a texture useful for building out the hive.

Young worker bees can produce roughly 16 scales in 24 hours. It takes a lot of bees to create a beehive – to make one gram of wax, 1000 scales are needed!

Do bees have lungs?
Do bees sleep?

How many hearts does a bee have?

Honey bees have one heart that pumps blood to the rest of the body. They have an open circulatory system, without the need for enclosed blood vessels. Instead, blood gets pumped into a cavity called a hemocoel.

How many eyes does a bee have?

A bee has five eyes in total which provide excellent vision. They have two large compound eyes and three small ocelli eyes.

Do bees have teeth?

Although bees don’t have teeth, they have mandibles, or jaws, which have rounded points for chewing their way out of their cell, chomping up beeswax, nectar, and more. 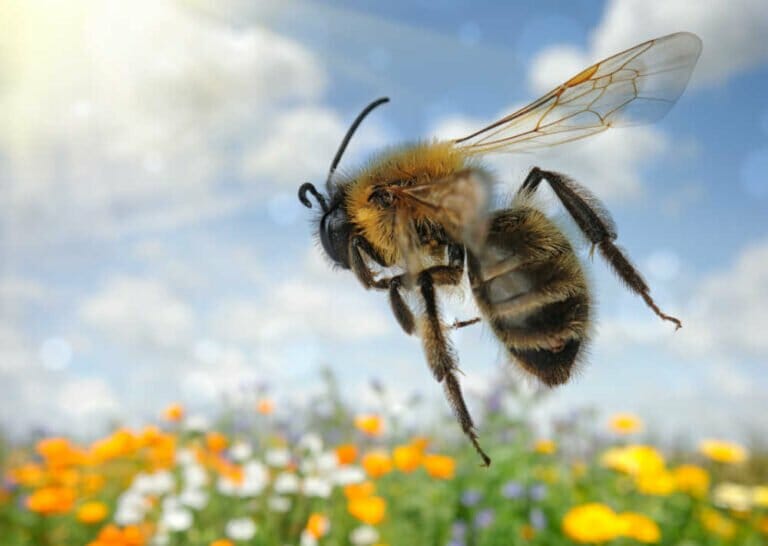 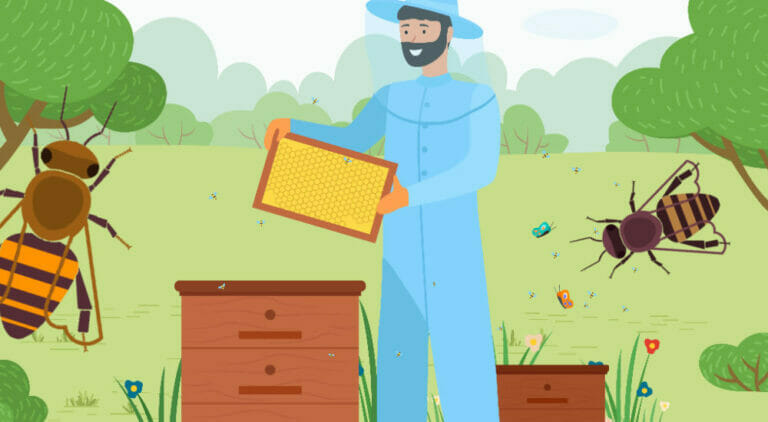 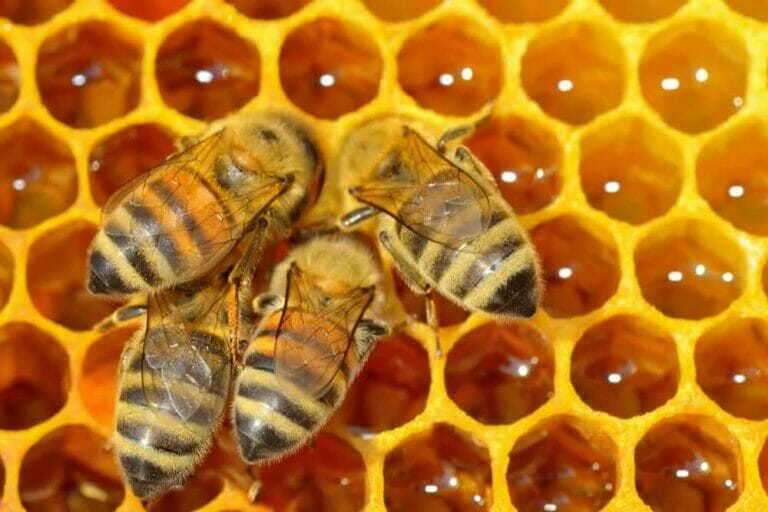 Italian bee: Apis mellifera ligustica The Italian honey bee is the most popular breed with beekeepers worldwide. Found in climates ranging from icy cold through to tropical, these bees are…