Russian and Italian bees are both excellent options for beekeepers, but which is best? They differ in appearance, but what matters more is their character traits.

Factors like swarm tendency, productivity, and defensiveness will vary depending on the breed of bee. Let’s take a close look at how they compare.

What is the difference between Italian and Russian bees?

Italian and Russian bees are both excellent breeds for beekeeping, although they have a tendency to swarm. Each race of bee is hard-working and can produce large amounts of honey in the right conditions. Italian bees are less aggressive and easier to requeen but are more likely to rob. The Russian breed overwinters well and has good resistance to varroa mites and other pests.

The Italian bee has yellowish-brown bands on a brown abdomen. The queen is often a darker shade of orange or leathery brown, making it easier for beekeepers to spot her in the hive.

Pure Russian honey bees are typically a black or dark brown shade with pale yellow stripes. But if the hive requeens, she could mate with other drone breeds, which will alter the appearance of the colony.

Researchers believe Italian bees originated from the southern region of Italy. In 1859, Italian honey bees were introduced to America, where they soon replaced German bees. Italian bees are now on every continent except Antarctica.

Russian honey bees are from the Primorsky Krai region of Russia. They arrived in the United States in 1997 and have grown in popularity amongst local beekeepers.

Russian bees have a reputation for swarming, which they will do if they are not managed well during periods of excess nectar and pollen. Hands-on, effective hive management is often vital for keeping Russian bees in their home.

Although Russian bees often build queen cells and raise queens, they usually stay in their current hive without swarming. Worker bees destroy most queen cells before the queen emerges, but around 20% of colonies will allow two queens to coexist. This behavior would never occur in a colony of Italian bees.

Italian bees are also prone to swarming during spring buildup. The colony rapidly expands, causing half the bees to move to a new home.

Beekeepers who use Italian bees will need to take an active approach. Regular inspections during nectar flow should ensure the hive has enough space to grow.

Extra brood boxes or supers should be added early to reduce swarming tendency, whether the colony is Russian or Italian.

Italian and Russian bees are prolific breeds that are highly productive. With proper hive management, both will produce large quantities of honey – enough for bees and beekeepers.

While Italian bees work consistently through the warmer seasons, Russians adjust their tempo based on environmental cues. When nectar and pollen are scarce, they will scale back brood production accordingly. Once foraging improves, the colony will drastically ramp up brood and honey production. Beekeepers must keep a close eye on hive space to reduce their tendency to swarm.

Varroa and tracheal mites can destroy hives when given the opportunity. Russian bees may not be immune but have an excellent natural resistance to mites.

They are efficient housekeepers, actively grooming and uncapping cells that contain mites. This breed aggressively removes unwanted intruders from the hive. Russians may shut down their brood nests, providing mites with nowhere to hide.

Russian bees also have some resistance to American foulbrood, and early research is promising for small hive beetle.

Italian bees are more susceptible to mite infestations than Russians. They aren’t as aggressive at keeping out parasites and rear brood continuously once the cold months end. These brood cells allow mites to develop rapidly in hiding.

Purebred Russian bees are well worth considering in areas prone to mites and disease. In most cases, a well-managed thriving colony of Italian bees is also capable of maintaining a healthy mite-free hive.

Russian bees are generally a little more aggressive than Italian bees. This is especially true when they cross with other races. Beekeepers who are used to the gentle nature of an Italian colony may notice a more defensive hive with Russian bees.

Russian bees aren’t problematic, though. A little extra smoke and a gentler inspection approach will usually result in a trouble-free interaction.

As with any breed, a Russian bee’s temperament will vary depending on factors like strain and hive conditions.

Russian bees were initially introduced to the U.S. from the Primorsky Krai region in Russia. The area is a bitterly cold part of the world where bees have had to adapt to climatic conditions.

Russian bees form tight winter clusters that allow them to conserve heat efficiently. This means they are thrifty consumers of stored honey and tend to survive cold winters well.

A colony of Russian bees will brood rearing once foraging conditions become unfavorable. The hive can deal with long, harsh winters with fewer mouths to feed.

Italian bees form looser clusters through winter. This formation isn’t a problem in warmer climates but can be in the northern states. They burn through honey much faster to stay warm, meaning beekeepers must remain vigilant. Feeding sugar water or pollen patties will help keep them alive, but it can introduce new problems like small hive beetle.

Beekeepers often find Russians are more challenging to requeen than Italians. They are tougher to requeen and will take longer to get accepted by bees of another stock. The queen can take up to 16 days to start laying eggs which is much slower than Italian bees.

Italian beehives are also relatively calm during requeening. The hive will typically accept the new queen quicker, with less chance of her untimely death. There is less wasted time waiting for the new queen to lay eggs, making a more efficient hive.

Italian bees drift to other hives, which can result in robbing during a nectar dearth. They also tend to rear brood when limited food sources are available. This activity forces them to rob other hives to help feed their young.

Russian bees are less likely to drift and rob. As they cut-off brood rearing during a nectar death, they aren’t as desperate to find alternative food supplies.

Italian bees are more likely to have their own hive robbed. The colony’s guard bees aren’t as aggressive, providing easier access to outsiders. Their propolizing skills aren’t as effective, which makes the hive more susceptible to forced entry.

Are Italian or Russian bees best for my hive?

Italian and Russian bees are good choices for a hive, whether a hobbyist setup or a commercial apiary.

Russian bees have superior resistance to disease and mites and adapt well to cold climates and sporadic foraging seasons.

Does it matter what honey bee breed to choose?

While different bees have their strengths and weaknesses, the beekeeper plays a pivotal role in the hive’s success. Poor management will put pressure on even the strongest, purest-bred bees. In most cases, a skillful beekeeper will succeed with any bee breed, except perhaps if they’re Africanized!

Beekeepers should have good success choosing Russian or Italian bees. They are both considered excellent breeds with prolific queens and highly productive workers.

The discussion of bee breed traits only holds true when the purchased bees are pure stock. Be sure to buy from trusted sellers who guarantee you’re getting what you pay for. 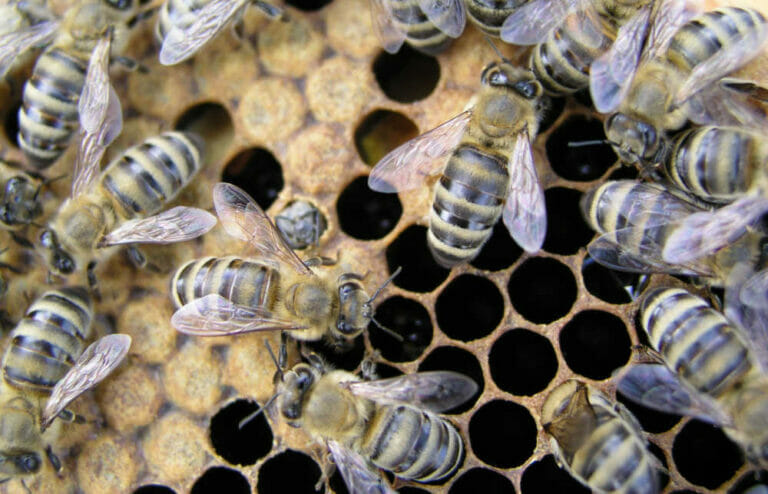